Bess goes Beyond and Back 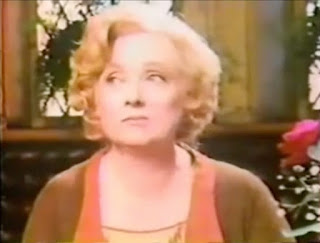 In the 1970s, Utah-based Sunn Classics Pictures produced a series of feature documentaries that investigated subjects such as Bigfoot and the Loch Ness Monster (The Mysterious Monsters), Biblical mysteries (In Search of Noah's Ark), and even The Lincoln Conspiracy. As a kid, I loved these, and the pseudoscience documentaries that today populate the History and Discovery channels own a debt to Sunn's productions.

In 1978, Sunn released Beyond and Back, which "dared to investigate" the question of life after death. While on-screen host Brad Crandall promised "one of the most extraordinary films of our times", Beyond and Back is more well-known today for making critic Roger Ebert's list of all-time "Most Hated" films.

But Beyond and Back contains a nice surprise for Houdini buffs. It includes a three and a half minute segment about Houdini with real footage, a reenactment of the Arthur Ford séance, and actress Beverly Rowland as Bess (she later appeared in Halloween 4: The Return of Michael Myers). Oddly, they add the words "learn" and "idea" to the end of the Houdini Message Code. For the record, the real code was: Answer (B), tell (E), pray-answer (L), look (I), tell (E), answer-answer (V), tell (E).

The full film is available on YouTube, but I've excerpted just the Houdini sequence below.