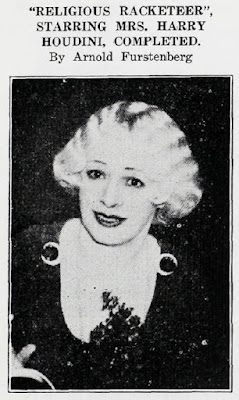 In 1937, having successfully set up a Houdini biopic at Paramount, Bess Houdini and Edward Saint turned their attentions to developing a second movie that would be starring vehicle for Bessie herself.

The film was to be called Madame Houdini Speaks. The idea was, having fulfilled her ten year "imposed silence", Bess would finally sound off on her views about spiritualism in a dramatic feature film. Saint claimed the film "will go into immediate production" and promised:

"The sensational picture will be packed with ghostly dynamite that will blast the fakes, frauds and humbugging religious racketeers hiding behind the cloak of spiritualistic superstition. Madame Houdini will play the part of herself on the screen and her long experience in tracking down the miracle mongers will be vividly portrayed in the spooky and mystic-laden production."


This is quintessential Edward Saint -- press agent-cum-carnival barker. However, there was more to this project than bluster. The film had a real producer in Fanchon Royer, "one of Hollywood's outstanding independent women producers", and a director in Frank O'Conner, who was also writing the Paramount Houdini biopic. A friend of the family, O'Conner was said to have performed with Houdini in vaudeville and "knew the great magician well."

Madame Houdini Speaks would eventually be released as Religious Racketeers (later retitled Mystic Circle Murder). It was filmed in March of 1938 at The Grand National Studios in Hollywood, which was located on the southwest corner of Poinsettia Street and Santa Monica Blvd. next door to the United Artists Studio. As announced, the film was produced by Fanchon Royer and directed by Frank O'Conner (whose Houdini biopic was never made). However, Bess would only appear at the beginning and end of the film as "Madame Houdini." But she did indeed "speak out" and proclaim her belief that communication with the dead was impossible.

The film was given a special "Magicians Preview" on April 12, 1938, where it received an especially positive (polite?) review from Richard Frohmann in Goldston's Magical Quarterly. Said Frohmann:

"Although Religious Racketeer makes no pretense at being a million dollar production, it tells a good story in an arresting and memorable manner. Mrs. Houdini plays an outstanding part in the story, and it is clear that her stage experience has stood her in good stead. The film is undoubtedly good-class entertainment for discriminating filmgoers, and never once borders on bathos or unreality."


Religious Racketeer premiered at Shea's Century Theater in Buffalo, New York on July 7, 1938. It then played limited engagements, typically as part of a double bill. In 1940 it was reissued as Mystic Circle Murder.

Predictably, the film sparked controversy in spiritualist circles. According to a report in Genii, the film was "hissed down by believers from Lillydale" (a "spirit camp"), who packed the Buffalo theater for its first showing. They later denounced the film in their journal, Psychic Observer, reproducing a letter from Bess "in her own hand" in which she states she had received a genuine message from Houdini (I expect they were talking about this letter).

-- runs only 68 minutes, a far cry from its originally reported 90 minute running time. Unfortunately, in this print, the epilogue with Bess is abruptly cut off. Did she have more to say? It appears so. In fact, she may have delivered a fairly lively last word. Evidence for this exists in a review in The Jinx, which quotes Bess in the epilogue as calling mediums "those leeches."

Hopefully, the cut epilogue will one day be rediscovered and restored so we can hear Madame Houdini speak. 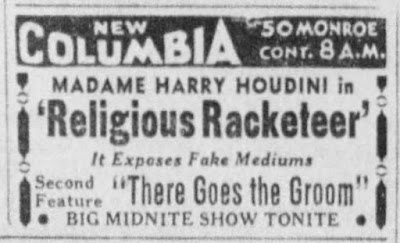 Thanks to Marc Wanamaker of the Bison Archives for the information on the Grand National Studio.