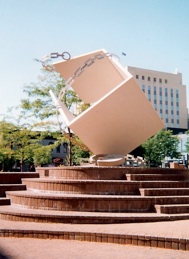 In 2010, Appleton's "Metamorphosis" sculpture, which had stood in the center of Houdini Plaza since 1985, was removed and put into storage while the plaza underwent a massive renovation.

The new Houdini Plaza now has a beautiful fountain centerpiece, and WHBY reports that Alex Schultz, president of Sculpture Valley, is trying to find Metamorphosis a new home.

Schultz says one possible location is a roundabout on the east end of the College Avenue bridge. A second location would be along Lawe Street. Schultz points out that there's already a marker at the place where Houdini almost drowned as a child.

Metamorphosis sits atop a red-brick platform that resembles a stage. The abstract metal box is balanced on the point of one of its corners and draped with a padlocked chain. The sculpture was created by Richard C. Wolter and was donated to the city by Boldt Development Corp. (yes, as in Tom Boldt).

Metamorphosis is currently in storage at the city's facility and grounds building in Memorial Park.