A new documentary, Harry Houdini: Magic Among The Spirits, will have its premiere tonight on PBS station KRBC in Northern California. This appears to be the same documentary by Tom Wyrsch that first screened in Sonoma back in 2012. 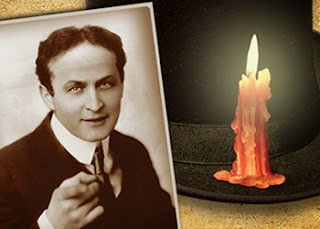 Thursday, October 30 at 8 pm. This program tells the story of how Houdini's magic led to his involvement in seances, his untimely death, and the pact he made with his wife Bess to try to reach him in the hereafter. The film details how the Houdini seances made their way to Sonoma County in 1964 and continued every Halloween night until 2002. Viewers will see the secret locations where they were held, the people who attended, and if contact was made. This 37-year annual Halloween event celebrates its 50th anniversary this year. Interviews, historical film footage and photographs tell the complete story.


Great to see that this documentary has made it to television. Hopefully a DVD will be made available so we can all enjoy Harry Houdini: Magic Among The Spirits.

You can read more about the Annual Sonoma Houdini Seance at Petaluma 360.