Pontefract Paranormal in the UK will hold the "World Famous Houdini Seance and Ghost Hunt" at York Castle Prison in York on Halloween. Here is a description from the event page: 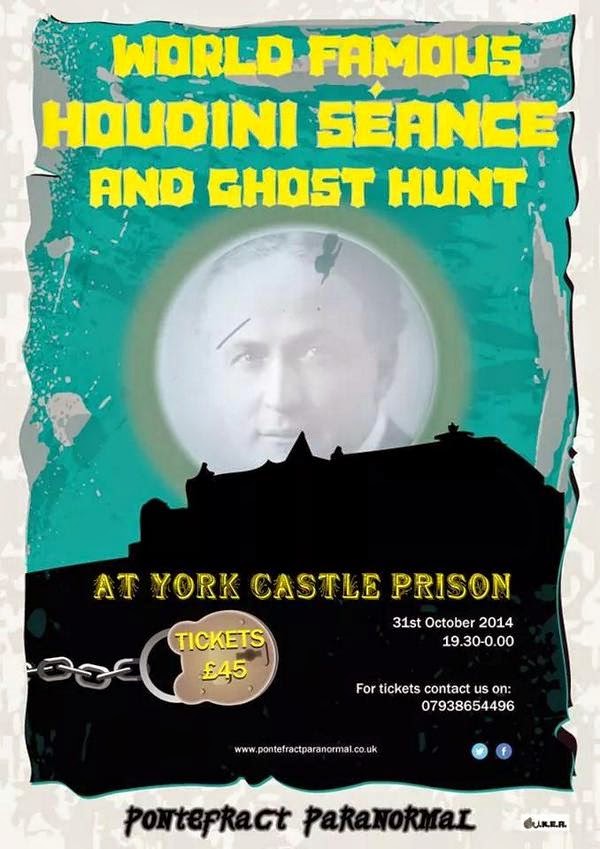 York Castle Prison has been a site of justice and incarceration for almost 1000 years. William the Conqueror built the first castle here in 1068 as a base to control the North of England and we know from written references that it had a prison.

One of the most famous prisoners was Dick Turpin and Harry Houdini refused to attempt to escape from his cell despite his skill in 1909 so we're going to hold a Houdini Seance using an actual pair of his handcuffs to strengthen the link. Houdini seances are world famous because Houdini died on Halloween and told his wife that if there was an afterlife he would make contact on Halloween and ever since seances have been held to attempt contact with the great man.

York is the ultimate ghost town and the prison is no exception with reports of many many spirits and ghosts it is THE place to be on Halloween. So Join Pontefract Paranormal and various experts in escapology and Dick Turpin to contact possibly the worlds most famous escapologist and join our investigation when the veil between the world is at it's thinnest.

We will provide some refreshments but it is recommended that you bring some snacks. A torch is essential. You must wear appropriate clothing for the time of year plus flat shoes. You may bring your own equipment including camcorders and cameras but we ask that you upload any pictures to our facebook site.


You can buy tickets to the event HERE. The official Facebook page reports that there are only 5 tickets left, so move fast!

This of course should not be confused with the Official Houdini Seance, which this year is being held in Danvers, MA.
Written by John Cox at 1:31 PM