On October 11, 1926, Houdini broke his ankle while performing the Chinese Water Torture Cell at the Capitol Theater in Albany, New York. This is generally considered the start of a chain of events that would lead to his death 20 days later. This ankle breaking incident was dramatized for the first time in the recent Houdini miniseries with Adrien Brody.

To mark the occasion, here's a sensational letter from the collection of our friend Thomas Ewing of Haversat & Ewing Galleries. This is Houdini's own account of the accident in a letter to magician James S. Harto written 88 years ago today.


I met with an accident with the Water Torture Cell last night. The cover snapped as we were drawing it up, and I have some sort of a fracture on the left leg. The left side of my body is somewhat weaker than the right, or perhaps it just struck a glancing blow. Anyway, it hit with enough force to smash the cover which is of heavy nickel-plated steel. If the blow had not broken the cover, I was informed by a doctor who was in the audience that it would have cut off my left ankle. I cannot believe that, hardly, but I guess it is so.


Tom points out the intriguing mention of Houdini's body being weaker on the left side than the right. Evidence of some early stage of illness? The final paragraph is utterly chilling as he maps out exactly what will be his final days on stage.

Thanks to Joe Notaro for reminding me of this anniversary. Joe also has some info on the Albany accident today on his blog Harry Houdini Circumstantial Evidence.

Thanks to Tom Ewing for allowing me to share this remarkable letter on WILD ABOUT HARRY.

UPDATE: Here's an interesting addendum to this story. This is a newspaper notice from the Van Curler Theater in Schenectady, Houdini's next stop in his tour, downplaying the accident and assuring audiences that he would perform as planned. 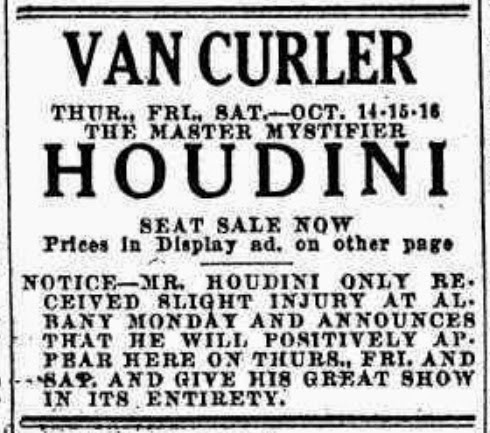