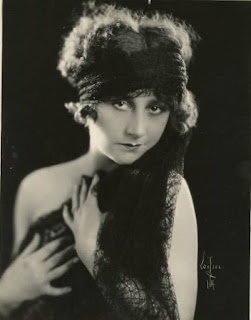 The other female star in Houdini's 1918 serial The Master Mystery was Ruth Stonehouse, who was born on September 28, 1892 in Denver, Colorado. Stonehouse played the deliciously named Zita Dane, confederate of the villainous Balcom, and is later revealed to be the sister of Houdini's Quentin Locke (if I remember my Master Mystery plot twists correctly). Her character is somewhat dour, and it's hard to believe that Stonehouse is actually five years younger than leading lady Marguerite Marsh.

In addition to being an actress, Ruth Stonehouse was also a director of early silent film, which certainly made her a cinema pioneer. When she did The Master Mystery, Stonehouse was a big enough name to share billing alongside Houdini (see below). Today her participation in the film is overshadowed by the more sensational aspects of the story -- not to mention Houdini himself -- and is all but forgotten. This is a shame because Stonehouse's presence must have added a measure of legitimacy to this first production from Octagon Films.

Here is her biography on Fandango:

Pioneering American silent screen actress Ruth Stonehouse was the first leading lady of Chicago's Essanay Co. She stayed with Essanay for close to four years -- often appearing opposite the era's great matinee-idol Francis X. Bushman -- before seeking greener pastures at the newly inaugurated Universal City. This rambling, somewhat chaotic studio offered Stonehouse the chance to write and direct some of her vehicles, mostly polite situation comedies but also melodramas with intriguing titles such as A Limb of Satan (1917) and The Saintly Sinner (1917). Stonehouse's popularity was on the wane by 1920, and she spent the remainder of her screen career playing fallen women. She retired in 1927. ~ Hans J. Wollstein, Rovi


Ruth Stonehouse died in Hollywood, California of a cerebral hemorrhage on May 12, 1941, at the age of 48. 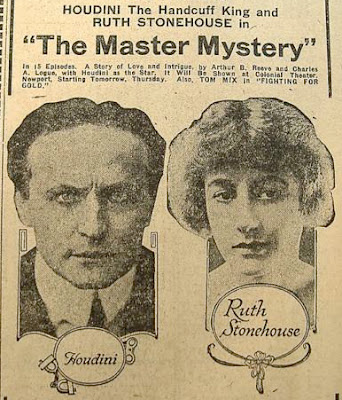 More Houdini leading ladies:
Written by John Cox at 9:51 AM