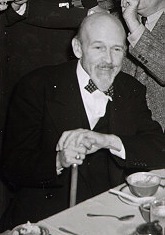 Today is the birthday of Edward Saint, who was born Charles David Myers on February 8, 1890.

Saint lived a colorful life as a carnival barker and performer until he met the widowed Beatrice Houdini in 1930 and became her manager and companion. Some claim Bess and Ed were actually married, but kept it a secret so as not to tarnish Bessie's marketable "Madame Houdini" image.

Saint worked tirelessly to promote Houdini legacy and was the driving force behind the Final Houdini Seance in 1936. He died of pneumonia on October 22, 1942 at the age of 52 (same age as Houdini when he died).

Recently I went in search of the final resting place of Ed Saint with several other Houdini buffs. You can watch our adventure here.

Happy birthday, Ed!
Written by John Cox at 7:50 AM