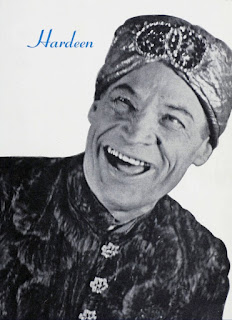 Like his famous brother, Theodore "Dash" Hardeen was born in Budapest, Hungry. But also like his brother, Hardeen claimed Appleton, Wisconsin as his birthplace and selected a new birthday to go with it.

While Houdini chose April 6 (because that was the day his mother always wrote to him), Hardeen had a sense of humor about it and selected February 29, Leap Day, as his adopted birthday.

Houdini biographies for children often say something to the effect that "poor Theo could only celebrate his birthday once every four years." Always overshadowed by Harry! But I think what it really tells us is that Dash didn't take himself nearly as seriously as his brother.

So even though we now know he was born on March 4, 1876, lets celebrate Hardeen's adopted birthday TODAY as we only get this opportunity once every four years.