Tomorrow marks the 69th anniversary of the death of Beatrice "Bess" Houdini on February 11, 1943. She passed away aboard a train bound for New York as it arrived in the town of Needles, CA. For the occasion, I thought I'd take a look at the question of her two gravesites.

Bessie's first grave is the one that was prepared for her in life. Inscribed on Houdini's tombstone in Machpelah Cemetary in Queens, NY, is Bess's full name, Wilhelmina Beatrice, her birth year, and the year of her death which as you can see in the pic below has not been carved. That's because despite Houdini's wishes, Bess was not buried alongside him in the Weiss family plot. 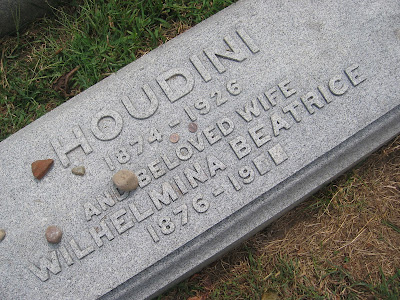 Instead Bess was buried in Gate of Heaven Cemetery in Hawthorne, New York. The reason for this has never been made 100% clear, but it's said that her family wanted her buried in a Catholic cemetery (consecrated ground and all that). Some have said Machpelah wouldn't allow Bess to be buried there, but from what I've read online, Jewish cemeteries do allow the burial of non-Jewish spouses.

According to David Charvet's superb article on Bess in Magic (Oct 1995), Bess's sister Marie claimed "that Bess had re-embraced Catholicism on her deathbed." So if it was Bess's wish to be buried in a Catholic cemetery instead of Machpelah, so be it. But if it wasn't, I think it's sad that religion, which did not prevent Harry and Bess from falling in love and getting married in 1894, would separate them in eternity.

Nevertheless, Bessie does have an attractive headstone in Gate of Heaven, and she's in good company with such notables as Babe Ruth, James Cagney, New York mayor Jimmy Walker, and Houdini's friend and associate Fulton Oursler nearby. 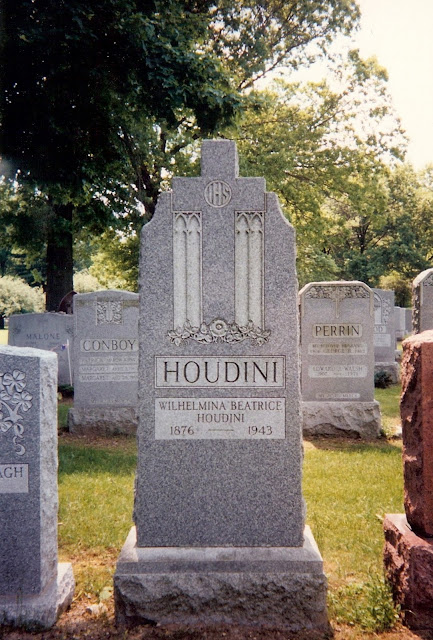 Thanks to Joe Fox for the photo of Bess's Gates of Heaven headstone.
Written by John Cox at 12:29 PM