The most overlooked of all Houdini's leading ladies (for reasons I will explain below) is Rosemary Theby, who was born Rose Masing on April 8, 1892, in St. Louis, Missouri. Theby played Stella Mourdant, wife of the villainous Guy Mordaunt (described as being "no better than her better-half"), in Houdini's second feature for Famous Players-Lasky, Terror Island. 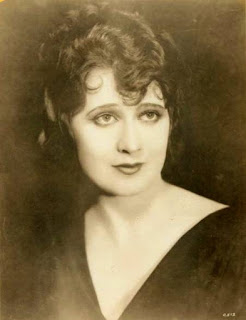 Slender, sad-eyed leading lady Rosemary Theby made her film debut in 1912, and that same year starred as Celia in a greatly abbreviated film version of Shakespeare's As You Like It. In her heyday (1915-1922), Theby often co-starred with her husband, actor/director Harry C. Meyers; among other roles, she played Morgan Le Fey in Meyers' lavish version of A Connecticut Yankee in King Arthur's Court (1921).

Professional and financial reverses forced both Theby and her husband into bit parts and extra roles during the talkie era. Several of Theby's 1930s assignments were obtained through the kindness of comedian Oliver Hardy, who'd been a minor player in some of the actress' pre-WWI vehicles. Rosemary Theby's best talkie role was the laconic Mrs. Snavely in the classic W.C. Fields two-reeler The Fatal Glass of Beer (1932). ~ Hal Erickson, Rovi


Theby is present throughout Terror Island, and even has the distinction of being the only Houdini leading lady to die onscreen (she's shot on the sinking submarine -- blink and you'll miss it). However, Theby's best scene, in which she vamps Houdini's Harry Harper in an attempt to get a map from him, is contained on one of the two reels that are missing from the only known print of the film. There isn't even a description of this scene on the explanatory cards that summarize the missing action on the DVD. All we have of Theby's performance here are a few stills, including a lobby card that reads: "Are you crazy, madam?".

This may be why she is often forgotten among the pantheon of Houdini's leading ladies. In fact, poor Theby's photo in The Secret Life of Houdini is misidentified as being Nita Naldi in The Man From Beyond (wrong vamp, wrong film).


More Houdini leading ladies:
Written by John Cox at 8:43 AM