The Automaton loses his title as first movie robot (update) 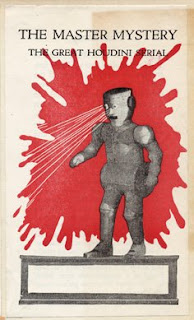 There isn't much to brag about when it comes to Houdini's movie career, but one point of pride has always been the fact that his 1918 serial, The Master Mystery, featured the very first movie robot (even though "Q The Automaton" was revealed to contain a man in the end). This is a fact that is often cited in articles on movies and sci-fi cinema history.

But now it looks like we can no longer award this seminal sci-fi moment to The Master Mystery. The blog The End of Being has posted photos and a clip from a lost 1913 Italian film called The Mechanical Man, featuring with a pretty spectacular movie robot -- dang-it.

But I guess we can still say The Mastery Mystery contained the first robot in American cinema history. That's still pretty good.

By the way, I often wonder what ever happened to the Automaton costume, or even just the head? Wouldn't this be a wonderful find in 2012?


UPDATE: Not so fast! According to reader Janne Wass, The Mechanical Man was made in 1921, not 1913. Read: Q reclaims his title as first movie robot (kinda). Thank you, Janne.
Written by John Cox at 1:31 PM