Continuing our look back the leading ladies who shared the bill with Houdini in his silent movies, today we meet the lovely Lila Lee, who was born Augusta Wilhelmena Fredericka Appel in Union Hill, New Jersey, on July 25, 1901.

At age 18 Lee landed the part of Beverly West in Houdini's second feature for Famous Players-Lasky, Terror Island (1920). Lee is the most physical of all of Houdini's leading ladies, finding herself in the middle of much of the action. Her leap through a barn door on her horse is as impressive as Houdini's own spectacular stunts in the film (and it appears it's really Lee who did the stunt). She even appears alongside Houdini in a rare three sheet poster (below). 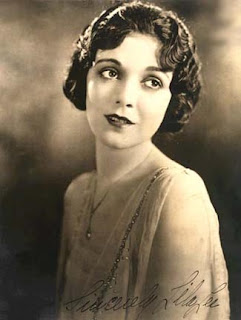 A pretty, apple-cheeked WAMPAS Baby Star of 1922, Lila Lee had been a performer since childhood and was widely known as "Cuddles," one of the stars of Gus Edwards' kiddie troupe. She was brought to Hollywood by Paramount's Jesse Lasky and headlined in her very first film, The Cruise of the Make Believe (1918). In typical silent screen style, she played a poor girl secretly supported by a rich admirer and the New York Times thought she had a "limitless future before her."

After appearing as the servant wench in Cecil B. DeMille's Male and Female (1919), Paramount began to see the newcomer as a potential successor to that popular film's star, the elegant Gloria Swanson, and embarked on a hefty publicity campaign. Lee's detractors, however, were quick to point out that her work never really lived up to the ballyhoo. "She seemed permanently neutral," as one critic pointed out. Her co-starring turn opposite Rudolph Valentino in the immensely popular bull-fight melodrama Blood and Sand (1922) was still far from persuasive but her jet-black hair, severely braided in coils over each ear, created a trend and the fan mail kept pouring in. Her tumultuous marriage to matinee-idol James Kirkwood, very much an "A Star Is Born" affair, created additional headlines that lasted until their divorce in 1931.

Lila Lee's up-and-down screen career was bedeviled by severe bouts with what was euphemistically referred to as tuberculosis but whispered to be the results of acute alcoholism. As Lon Chaney's leading lady in The Unholy Three (1930), she was positioned to become one of the new sound era's first major stars but a series of bad judgments and, again, highly publicized bouts with illness, led to supporting roles in Grade-B films. In 1936, she was a witness to the suicide of playboy Reid Russell and the resulting headlines reportedly made her camera shy. There were several aborted stage comebacks in the 1940s, a short-lived marriage or two, and appearances on early television soap operas in the 1950s. Her son with Kirkwood, James Kirkwood Jr., became a noted author and playwright but Lee did not live to see his crowning glory, the legendary Broadway musical A Chorus Line. Retiring from performing after playing country singer Margie Bowes' hayseed mother in the Florida-lensed Cottonpickin' Chickenpickers (1967), the veteran star died of a stroke at Saranac Lake, NY, in November of 1973. ~ Hans J. Wollstein, Rovi


Lila Lee is one of only two Houdini leading ladies to have a star on the Hollywood Walk of Fame at 1716 Vine Street, very near the original location of the Famous Players-Lasky Studio where she worked with the Great Houdini. 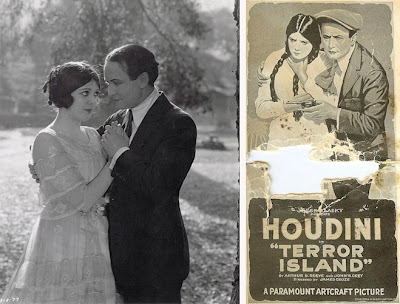 More Houdini leading ladies:
Written by John Cox at 6:44 AM