While the leading lady of Houdini's 1922 The Man From Beyond was Jane Connelly, the more famous actress in that film was Nita Naldi. Born Mary Nonna Dooley on March 1, 1895 in New York City, Nadi was probably the biggest female star Houdini ever worked with. She had played opposite John Barrymore in Dr. Jekyll and Mr. Hyde, and would famously vamp Valentino in Blood and Sand, released the same year as The Man From Beyond.

In the film Naldi played Marie Le Grande, "the vamp", which was her specialty. Even though she doesn't actually appear in a scene with Houdini (at least in the existing print), she was featured in The Man From Beyond publicity, which played up the fact that she had just signed a five year contract with Famous Players-Lasky/Paramount. 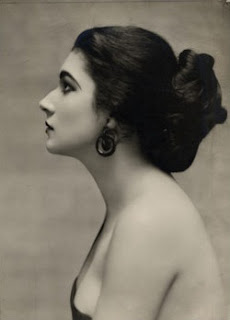 The "female Valentino," as she liked to call herself, Nita Naldi became the most outrageous vamp of the 1920s -- reportedly both on and off the screen. Born Anita Donna Dooley and convent-educated, Naldi took her professional name from a school chum (Mary Rinaldi) and set out to conquer the world of show business with a vengeance. A chorus girl in The Passing Show of 1918 and The Midnight Whirl (1919), Naldi was appearing in Morris Gest's Aphrodite (1919) when approached by John Barrymore, who cast her as Gina in Dr. Jekyll and Mr. Hyde (1920). Although Barrymore would later dismiss her as his "dumb Duse," Naldi is surprisingly modern in her flamboyant role as Hyde's would-be seducer and she steals every scene she's in. She was personally selected by famed writer Vicente Blasco-Ibanez (who, Naldi claimed, dropped his dentures down her cleavage while engaged in a tirade against the Catholic church) for the role of the temptress Doña Sol in Blood and Sand (1922), outrageously vamping Rudolph Valentino who seems to be literally energized by her lustful behavior. The florid melodrama became her signature film and was so popular that she was reunited with Valentino twice in A Sainted Devil (1924) and Cobra (1925). Gertrude Olmstead met Naldi while filming the latter and later told the film historian Anthony Slide that the notorious femme fatale was "so sweet to me and so very interesting."

Contrary to popular belief, Naldi did not play the native girl in Alfred Hitchcock's directorial debut, The Pleasure Garden (1925), but she did turn up somewhat unexpectedly as the schoolteacher in his second film, The Mountain Eagle (1926), a presumably welcome respite from vamping. A few more European films followed, including Léonce Perret's La Femme Nue (1926), but her type had become an anachronism by then and she wisely retired at the advent of sound. There were brief returns to Broadway -- The Firebird (1932), Queer People (1934) -- and Naldi became one of the former Hollywood luminaries featured at Billy Rose's Diamond Horseshoe nightclub in the early '40s, where, quite appropriately, she recited Rudyard Kipling's famous poem A Fool There Was backed by a line of chorus boys. Naldi's final public appearance came opposite Uta Hagen in the 1952 stage comedy In Any Language.

One of the last of a breed, Naldi brought old-fashioned screen vamping into the more liberated age of the Roaring Twenties, the true heiress to the throne vacated by Theda Bara. But screen vamps rarely took themselves too seriously, she confessed in a later interview. "At least I didn't and I know some of my best friends and rivals didn't either." Spending her final years as a recluse, Nita Naldi died of a heart attack in her room at Manhattan's then-shabby Wentworth Hotel in 1961. Sadly, she had been dead for at least 48 hours when her body was finally discovered. ~ Hans J. Wollstein, Rovi


Interestingly, Nita Naldi has several things in common with Houdini's Terror Island leading lady, Lila Lee. Both appeared in Blood and Sand and both have the honor of being the only Houdini leading ladies to have stars on the Hollywood Walk of Fame. Naldi's star is at 6316 Hollywood Blvd., directly across the street for Bess Houdini's Hollywood hangout, Sardi's.

For more on Nita Naldi, vist the excellent nitanaldi.com.

More Houdini leading ladies:
Written by John Cox at 9:36 AM

Email ThisBlogThis!Share to TwitterShare to FacebookShare to Pinterest
Tags: [History], 1922, Movies, Series: Leading Ladies, The Man From Beyond (1922), Valentino, Walk of Fame