Today I'm launching a series of blog posts featuring a look back at the leading ladies who shared the bill with Houdini in his silents movies. I thought I'd start off with Ann Forrest, who was born Anna Kromann on April 14, 1895 in Sønderho, Denmark. At age 24 Ann landed the plum role of aspiring reporter Mary Cameron in The Grim Game, Houdini's first feature film for Famous Players-Lasky.

Here is Ann Forrest's biography on Fandango (a terrific resource for bios of silent stars): 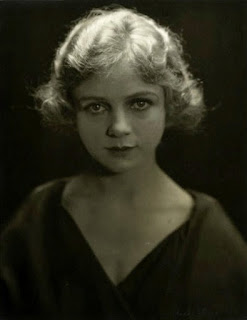 Danish-born silent screen actress Ann Forrest began her film career in 1915 performing diving stunts for the American "Flying-A" company under her real name, Ann Kroman. She became a star three years later opposite William Farnum in the first screen version of Zane Grey's The Rainbow Trail (1918), a major success for Fox, who would film the story twice more. It was Farnum who on the film's Grand Canyon location grandly rechristened the Danish actress as Ann Forrest; Kroman, according to Farnum, was too foreign for an American star. The brawny actor picked Forrest because, he explained, the name "signified something big, yet short and snappy."

The newly christened Ann Forrest was Harry Houdini's beleaguered leading lady in the action melodrama The Grim Game (1919) and earned rave reviews for playing a pathetic kitchen maid in The Prince Chap (1920). Blonde and "cute" rather than beautiful, Forrest made a strong impression on director Cecil B. DeMille who signed her to a five-year personal contract. Not exactly the type to loll about on a tiger skin like DeMille's usual coterie of leading ladies, Forrest never actually appeared in a DeMille film but was instead shipped overseas for Love's Boomerang (1922) in which she earned above-title star billing. Filmed in both England and France, the melodrama was a major success but her return to Hollywood proved anticlimactic and she left films in 1926 in favor of the legitimate stage.

In 1930, along with her director and leading man, Forrest was arrested and charged with "indecent exposure" during rehearsals for the then-controversial play Frankie and Johnny. That incident, along with a severe car accident, curtailed Ann Forrest's stage career and she retired completely from show business in 1931. ~ Hans J. Wollstein, Rovi


According to her Wikipedia entry, Ann Forrest died on October 25, 1985 in San Diego, CA. That would have put her at age 90. Of all of Houdini's leading ladies, Ann enjoyed the longest life. It's a shame she was never interviewed (as far as I know) about her recollections of working with the Great Houdini.

More Houdini leading ladies:
Written by John Cox at 7:06 AM