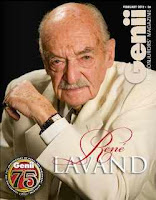 Just a heads-up that the February 2012 issue of Genii includes an obituary of Houdini collector Sidney Radner written by Kenneth Silverman (Houdini!!! The Career of Ehrich Weiss). As you would expect, it's beautifully written tribute. In regards to Radner receiving Houdini's original equipment from Hardeen, it includes this little gem:

"He believed that Theo, a serious horseplayer, sold off such apparatus to pay gambling debts."


I believe this is the first time this has ever been acknowledged in print.
Written by John Cox at 8:29 AM