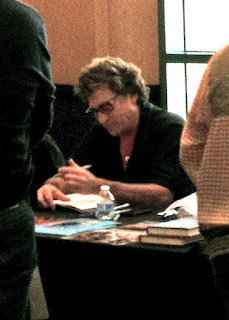 Yesterday I had the pleasure of meeting my favorite "Houdini", Paul Michael Glaser, at The Hollywood Show in Burbank. Here I was finally able to clear up one of the mysteries about his 1976 TV movie, The Great Houdinis.

In my Making of blog from last year, I noted that the final day of principle photography (May 25, 1976) was planned for the Belmont Amusement Park in San Diego, which was to double for Coney Island. Here a scene in which Harry proposes to Bess (Sally Struthers) aboard a roller coaster would be filmed.

While it appears in the script and shooting schedule (as well as in the novelization), this scene didn't make it into the final film. Was it cut, or never shot? It seemed unlikely that a TV movie would cut a scene that took this much effort and expense to film, so it was my guess that the scene and location were scrapped and the last day was used instead to complete a schedule that may have run over.

Even though it was 36 years ago, I figured Mr. Glaser would remember filming a scene aboard a rollar coaster, so I brought the question to him at the show and he was able to confirm that I was correct. The Belmont Amusement Park/Coney Island proposal scene was never shot. "No, we never did that," he said.

Thank you Paul Michael Glaser for clearing up the mystery. Below is the scene (that never was) as it appears in The Great Houdinis screenplay.