Catching up on Houdini books for kids

Here are two Houdini books for kids that I missed when they were first released, but are now sitting happily on my bookshelf.

First up is Ray & Me by Dan Gutman. This book tells the story of young boy who time travels back to 1920 in the hopes of saving Ray Chapman, the only baseball player in major league history to get hit by a ball and die. Along the way our hero meets up with Babe Ruth, Tris Speaker, and Harry Houdini! The book even contains a few photos of Houdini (nothing we haven't seen). 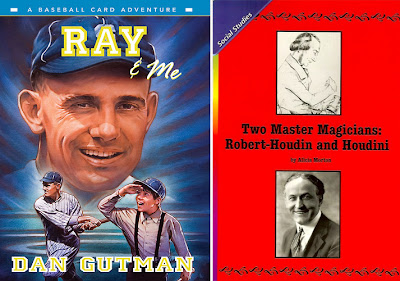 Ray & Me was first released in hardcover in 2009. The paperback was released in February of last year.

Also new to me is an 8-page social studies school booklet, Two Master Magicians: Robert-Houdin and Houdini by Alicia Morton. It's a nice little study guide that's well illustrated. Two Master Magicians was first released in 2008 and can be picked up on Amazon.

Speaking of Houdini books for kids, Kevin Connolly has posted a nice blog asking the question, Why is Houdini Still So Popular? Kevin cites the Scholastic Book Company's offering of The Great Houdini by Beryl Williams and Samuel Epstein as one of key things that has brought Houdini to school children for generations, and I believe he's absolutely right. First published in 1950, reprints of this first Houdini biography for kids was offered via the Scholastic Book Service catalog as #T76 well into the 1970s. I know I found it on the shelf of my grade school classroom, and it was the first Houdini biography I ever read.


Head on over to Houdini Himself and let Kevin know what brought you into the world of Houdini.
Written by John Cox at 7:38 AM