UPDATE: CLICK HERE to read my own reaction/review of this episode. Warning: it's not pretty. 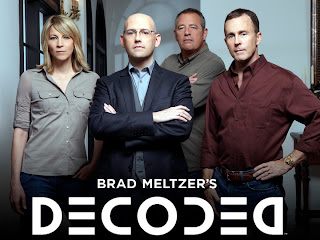 Was Houdini Murdered? That's the topic of Brad Meltzer's Decoded set to air on January 4, 2012 on The History Channel. The show will feature interviews with Lance Burton and Dorothy Dietrich among others.

The Houdini murder theory is not new. New York tabloids fanned the flames of a conspiracy within days of Houdini's death in 1926. Norman Bigelow revived the idea with his self-published book, Death Blow, in 1983. Recently the theory reached new heights with the publication of The Secret Life of Houdini and a push to exhume Houdini's body to test for poisoning.

For the record, I think the murder theory is ridiculous and all these "investigations" pure sensationalism. While Houdini certainly had his enemies among spiritualists (and I do believe Whitehead might have had an agenda to rough Houdini up), you just can't murder someone via appendicitis.

But I guess the murder theory is now a part of Houdini lore, and it does make for good TV. And there's always the possibility that Brad Meltzer might actually debunk the idea once and for all, although I'm not encouraged by the episode description. Guess we'll find out together on January 4. 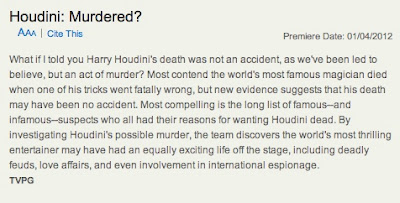 You can pre-order the DVD of this episode for $24.95 from The History Channel shop (release date February 15).
Written by John Cox at 10:38 AM