Randi reappears at The Magic Castle 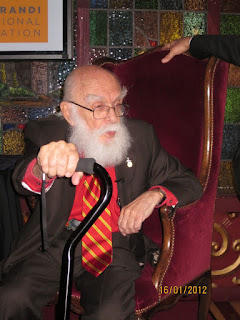 The legendary James "The Amazing" Randi made his reappearance at the (now re-opened) Magic Castle on Monday to continue his interview with Max Maven in the Inner Circle. It was, once again, standing room only, and Randi at age 83 was as energetic as ever.

Randi again told terrific stories about his life and career, and this time showed clips from The Tonight Show (the infamous psychic surgery segment) and Not For Women Only with Barbara Walters. Randi was especially keen to show the Walters clip, where he shared the stage with Mark Wilson and Doug Henning, and he revealed how he accomplished his feat of psychic drawing, which he says still baffles Walters to this day (you can check out the clip on Randi's JREF YouTube Channel).

Houdini got a few mentions in the course of the 2 hour interview. Randi and Maven talked at length about William Lindsay Gresham, who wrote Houdini The Man Who Walked Through Walls in 1959. Maven chided the book for being "filled with inaccuracies", which I didn't think was an entirely fair characterization. Sure, errors and embellishments crept in, but the Gresham book was a quantum leap forward from what had come before and exploded many of the myths created by Kellock. In fact, Houdini The Man Who Walked Through Walls was the first book to reveal that Houdini was born in Budapest on March 24. This was at a time when no less than Walter B. Gibson was insisting on an Appleton April 6 birth. I think the book deserves a lot of credit for that alone.*

Randi assisted Gresham on the book, and for his trouble Gresham promised Randi would be the "first and last name mentioned in the text." If you have a look at the book, you'll see that he kept his promise.

A special treat for every guest in attendance was a $1 million check from the James Randi Educational Foundation, redeemable "for proof of any paranormal activity." Randi has offered this challenge since 1996, and the prize has never been claimed.

At the conclusion of the talk, Maven presented Randi with a surprise. Sitting beside the stage was a covered easel. The black cloth was then draw away to reveal Randi's famous "The Man No Jail Can Hold" poster beautifully framed. The poster will be added to the Magic Castle's portrait gallery that joins the dinning rooms with the showrooms, a wonderful addition and a well deserved honor for one of the great men of magic.

Randi took delight in noting that the poster contains the name "Harry Houdini" hidden somewhere in the artwork, and promised "a quarter" to anyone who could find it. After the talk, people swarmed over the image, searching every detail, some using the lights of their cell phones. As far as I saw, no one found the hidden Houdini. (Yes, I know where it is.)

All in all, it was another magical evening with The Amazing Randi.

Thanks to Mark Willoughby for the photos. You can watch Randi's first Castle interview here.

*UPDATE: Along with correcting me on Randi's age (83 not 82), Max Maven also pointed out that while he did say that Gresham was filled with inaccuracies, he also said it was, to him, "the best of all the Houdini biographies." Thanks for the corrections, Max.
Written by John Cox at 2:27 PM