A unique promotional "Movie Card" advertising an upcoming showing of Houdini's The Grim Game at Kinema Theater in San Francisco has sold on eBay for $260.01. 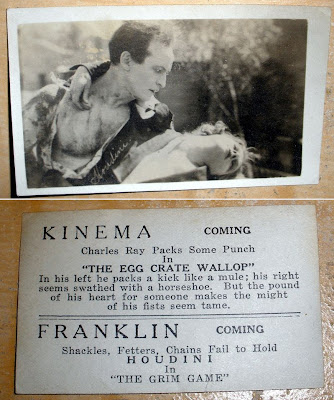 According to the seller, these cards were exclusive to the Kinema, Franklin and the T&D Theaters in Oakland and San Francisco (all owned by the Turner & Dahnken Theatre Circuit based in San Francisco) and were not nationally distributed. The seller believes it to be the only one in existence and called it "unbelievably rare."

This card contains an image of Houdini holding co-star Ann Forrest after the climatic plane crash. It also features a facsimile Houdini signature in white. The back of the card also promotes Charles Ray in The Egg Crate Wallop.
Written by John Cox at 7:23 AM