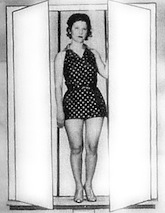 Dean Carnegie has uncovered an amazing amount of information on the elusive Daisy White, the magician's assistant and Martinka counter girl who was long rumored to be the original Houdini mistress. Daisy was memorably played by Adrienne Barbaeu in the film, The Great Houdinis.

But there's much more to Daisy, including the fact that Daisy White was not even her real name. So head on over to Carnegie: Magic Detective and let Dean introduce you to the real Daisy White.
Written by John Cox at 7:59 AM