No, The Magic Castle did not just sell Bessie's furniture 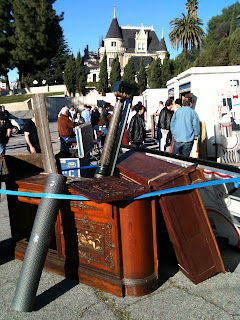 This morning The Magic Castle in Hollywood had a parking lot "Fire Sale" of items from inside the club that are being discarded after the recent renovations. It was a rare opportunity for members to own a piece of magic and Hollywood history.

I showed up at 8:30am sharp because I knew choice items would be snatched up fast, and I wasn't wrong. The first thing I saw was a fellow member walking away with an original Dante poster from the Dante Dining Room.

But then I saw something that made me stop in my tracks. For years I have been telling my guests that the large oak sideboard which sat in the Cherub Room and later in the Terrace Dining Room had belonged to Bess Houdini. This is because I recalled that it once sat inside the Houdini Seance Room along with a small organ which is also said to have belonged to Bessie. When I went to the Castle for it's reopening earlier this month, I noticed the sideboard was no longer there. Now, much to my horror, here it was in the Castle parking lot in two sections and tagged SOLD!

How could they sell Bessie's sideboard!? 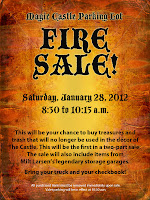 I was then fortunate enough to encounter the legendary Milt Larsen himself, so I asked him about the sideboard and whether it belonged to Bessie as I had once heard. Milt set the record straight. While the sideboard is a beautiful piece of furniture that he hated to part with, it had no history.

"We lie about a lot of things, but this isn't one of them," said Milt with a smile.

Milt then spoke about how he remembered going to Bess's apartment on Vermont, and despite my recollection, the sideboard had never been in the Houdini Room. (However, there is a photo of what appears to be the sideboard in the Seance Room on page 158 of Milt Larsen's Magic Castle Tour. But that same book later identifies it as coming from "a stately home in Pasadena", so...not Bessie's.)

Having solved the mystery of the sideboard (which I'm still sorry to see go), I was happy to come away with a beautiful wooden blade from a ceiling fan which Milt signed for me; "From The Magic Castle - Milt Larsen - 2012."

Be sure to check WILD ABOUT HARRY on Monday for a special milestone post.
Written by John Cox at 3:20 PM