The Man From Beyond released on DVD in France 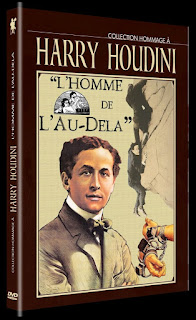 Houdini's 1922 silent film The Man From Beyond is released today on DVD in France as L'Homme de l'au-delà.

The DVD also includes a 47 minute documentary, The Fabulous Destiny of Harry Houdini, The Master of Mystery by Roland Lacourbe; a 15 minute documentary on The Magic of Blackstone; and an audio CD of original music of the film on a second disc.

As far as I know, this is the first foreign language release of one of Houdini's silent films. I'm curious to know whether this is the English version with French subtitles or an actual French print with original French title cards from 1922?

Email ThisBlogThis!Share to TwitterShare to FacebookShare to Pinterest
Tags: Blackstone, DVD, Movies, The Man From Beyond (1922)