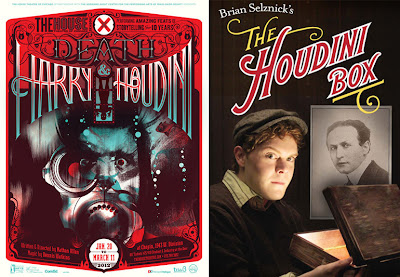 It's a great time to be a Houdini fan in Chicago. There are currently TWO stage productions playing in the city featuring Houdini as their subjects.

Starting today is The Houdini Box, a musical adventure from The Chicago Children's Theatre based on the book by award-winning children's author Brian Selznick. The Houdini Box plays at Chicago's Mercury Theater, 3745 N. Southport Ave, through March 3. It then moves to North Shore Center for the Performing Arts in Skokie. The Chicago Tribune named it as one of the "Top 10 shows to see in early 2012."

By the way, The Houdini's Box's Brain Selznick also wrote The Invention of Hugo Cabret. The film adaptation, HUGO, received 11 Oscar nominations this morning. Might this inspire Hollywood to make a film version of The Houdini Box?

UPDATE: Death and Harry Houdini extended to April 15.
Written by John Cox at 7:39 AM