Is this Houdini in a past life? 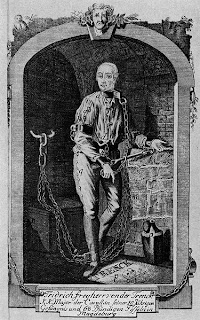 Yesterday I did a blog post about Houdini's belief -- according Walter B. Gibson -- that he was the reincarnation of a "German magician named Von Treck." I noted that I couldn't find any magician by that name. But now David Byron, a magic historian for The Mandala Magazine and blogger at Baroque Potion, thinks he may have found our man.

David suspects that the person Houdini had in mind (and body) was Friedrich von der Trenck. While he was wasn't a magician and he didn't die doing a Buried Alive stunt, he was German and famous for having made several daring escapes from a Prussian jail in 1746. He was later accused of being spy during the French Revolution and executed by the guillotine on July 25, 1794. (Oh dear, is this now ammunition for the "Houdini was a spy" theorists?)

As David points out, this illustration of von der Trenck from Wikipedia (above) "makes perfectly clear why Houdini might've had him in mind!"

UPDATE: The plot thickens! Joseph Pecore has sent me a link to Friedrich von der Trenck's autobiography where he talks about being buried alive!

UPDATE 2: Armed now with the correct spelling, the great Bill Goodwin at the William Larsen Sr. Memorial Library at The Magic Castle has sent over several articles from Houdini's lifetime that draw parallels between Houdini and Friedrich von der Trenck (called "Baron Trenck" in most of them). There is a lengthy article by Irvin S. Cobb titled, "Houdini Not First Handcuff King", and Houdini's own Conjurers Monthly Magazine cites an article about Houdini in New Age by Henry Ridgely Evans called, "A Twentieth Century Baron Trenck." Below is an example from The Sphinx, July 1920.