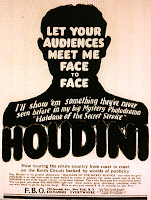 The Contemporary Jewish Museum in San Francisco will screen Haldane of the Secret Service and a five minute fragment of The Grim Game this Tuesday, January 3, as part of their special programing for Houdini Art and Magic.

Haldane of the Secret Service was Houdini's last feature film. It was made under the Houdini Picture Corporation banner in 1923 and distributed by FBO. FBO would later join the merger of RCA with the Keith-Albee-Orpheum circuit to become RKO.

By the way, there are only TWO WEEKS left to see Houdini Art and Magic at the Contemporary Jewish Museum. For information on the exhibition, visit the CJM's official website.