Is this a lost silent Houdini biopic?

This is one I've been meaning to post for a while. In the 1993 BBC documentary, Houdini, The Life of the World's Greatest Escapologist (a good documentary that's notorious for showcasing Ruth Brandon and her impotency theory), there appears this 35 second clip of what looks to be an unknown silent Houdini biopic.


So is this really a lost Houdini biopic? The documentary credits only add to the confusion, calling this a "1928 Bio-Pic 'The Great Houdini' © Ealing Film Studios MCMXCIII." The roman numeral on the copyright is 1993, so that might be the tip-off that this was created just for the doc. 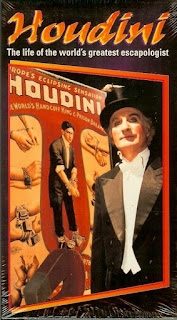 But if that's the case, where are the credits for the actors, and why call it specifically a "1928 Bio-Pic"? Being English, it's not impossible to believe that it had slipped under the radar for this long, and the 1993 copyright could simply mean that's when it was uncovered.

As exciting as the idea of a lost Houdini biopic is, I'm pretty sure this was made for the documentary, and it's probably tagged with the 1928 date because that was the year Ealing was founded. And the documentary does indulge in several other "artist" moments, so....

UPDATE: Looks like the mystery has been solved by an unimpeachable source:

Hi John, I was the actor who played Houdini. It was made specially for the documentary, and that was the only scene we shot, and I've never seen it up until today, so thanks! -Jonny Whiting