The Axis Theatre Company in New York will stage a new Houdini play in February 2014. Written by artistic director Randall Sharp, Nothing on Earth focus on Houdini's anti-spiritualism crusade and will feature Sir Arthur Conan Doyle and Margery. William Kalush and The Conjuring Arts Research Center are consulting on the production, which promises to recreate some of Houdini's effects. Here's a plot summary from the Axis Company website: 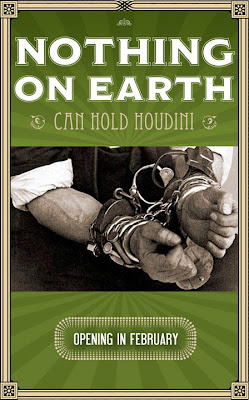 Axis Company will present Randall Sharp's new play Nothing on Earth in February. The play examines Houdini's driven crusade to expose fraudulent mediums and his crossing paths with the avid spiritualist Sir Arthur Conan Doyle. Both men are catapulted to the center of The Scientific American Magazine contest to find the first-ever provable clairvoyant. This battle destroyed their friendship and left Houdini to continue his search for a true psychic to contact his mother. He was not successful. Conjuring Arts Research Center is consulting with Axis Company to re-create some of Houdini's most famous illusions and bring the audience on a journey to the strangest part of his life story.

Since 1999 Axis Company has produced an eclectic series of original and published plays at their home in the West Village. The Axis Theatre was the location of William Kalush's Houdini seance this past Halloween. That seance got a nice write up in yesterday's Wall Street Journal.