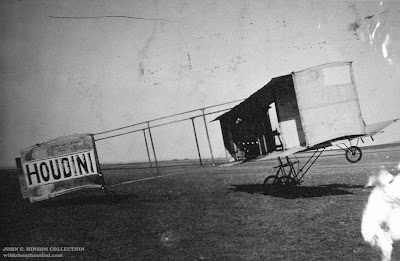 This photograph of Houdini's Voisin bi-plane doesn't qualify for our Unpublished Houdini series because it appears on page 169 of The Original Houdini Scrapbook by Walter B. Gibson. However, I still wanted to share it because the much better resolution of this photo direct from the John C. Hinson collection reveals a detail on Houdini's plane that I don't think has ever been spotted before.

You'll note in the enlargement below that there is writing on the tail of the plane above Houdini's name identifying the maker -- "Aeroplanes Voisin" -- and what looks like might be some additional technical specs or registration information (if they even did that back then). Pretty cool. 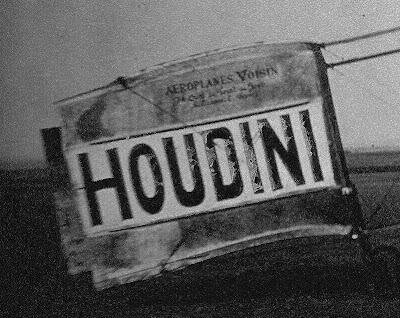 I've heard talk that the Houdini miniseries will feature Houdini aviation exploits. Maybe it's not too late for the production designer to add this detail to their prop plane?

In other Voisin news, the search for Houdini's plane is the subject of an article by Rebecca Maksel in the November 2013 issue of Air and Space Magazine. The article includes the possibly that the plane ended up in the possession of Chung Ling Soo, which is an idea that we first tackled back in 2010 during the centenary celebrations of Houdini historic first flight in Australia (see links below).

You can read the online version of the Air and Space article HERE.