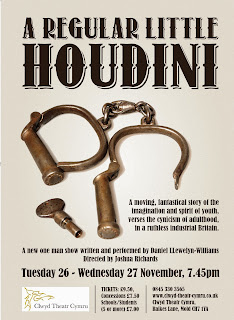 Welsh actor Daniel Llewelyn-Williams will première his one-man show, A Regular Little Houdini, at the Clwyd Theatr Cymru in Wales on November 26 and 27. The play is set in the Newport docks between 1905 and 1913; the two occasions that Houdini visited the city.

The play is told through the eyes of a young boy who is obsessed with magic. His story tracks the massive industrial growth of south Wales, the building of the transporter bridge and the Newport dock disaster of 1909. There are magic tricks and fantastical stories of monsters and Cyclopes and even an appearance by Houdini himself.

Daniel, who plays eight parts in the play, tells The South Wales Argus: "I blended these two stories of Houdini with stories of my own family and this young boy. The whole thing is about the perceived loss of childhood imagination. It’s a story of hope and tragedy."

A Regular Little Houdini is directed by Joshua Richards. Music is by Meg Cox. Tickets for the première dates can be purchased at the Clwyd Theatr Cymru website. It will also play at the Newport Riverfront on January 23, 24, 25, and the Swansea Grand on April 16, 2014.

Below is an interview with Daniel about the play and Houdini's visits to Newport.