UPDATE: You will want to read this review of the book before considering a purchase. Turns out it contains numerous errors, including, incredibly, that Houdini was born April 6th. How is it even possible to make that mistake in 2013!?

Houdini's performances in Chicago, along with those of other masters of magic, are chronicled in David Witter's just released book, Chicago Magic: A History of Stagecraft and Spectacle. Here's the description on Amazon: 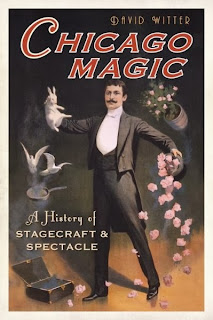 By the end of America’s "Golden Age of Magic," Chicago had taken center stage in front of an American audience drawn to the craft by the likes of Harry Houdini and Howard Thurston. Cashing in on a craze that rivaled big-band mania, magic shops and clubs sprang up everywhere across the Windy City, packed in customers and put down roots. Over the last century, for example, Magic, Inc. has outfitted magicians from Harry Blackstone Sr. to Penn and Teller to David Copperfield. Magic was an integral part of Chicago’s culture, from its earliest venture into live television to the card sharps and hucksters lurking in its amusement parks and pool halls. David Witter keeps track of the shell game of Chicago’s fascinating magic history from its vaudeville circuit to its contemporary resurgence.


Purchase Chicago Magic: A History of Stagecraft and Spectacle on Amazon.com.
Written by John Cox at 3:10 PM

Email ThisBlogThis!Share to TwitterShare to FacebookShare to Pinterest
Tags: Books, Other magicians