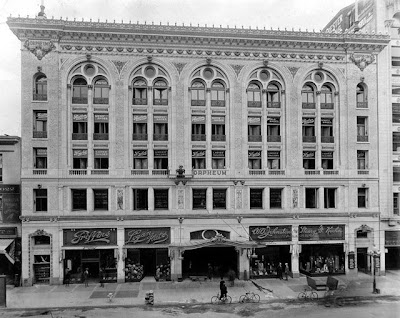 Here's another one for those in town this week for the Los Angeles Conference on Magic History. If you are Houdini location hunting downtown, you might be excited to discover the Orpheum Theater on Broadway with full marquee and towering sign still atop the building. Of course, it was at the Los Angeles Orpheum where Houdini had his famous verbal joust with Jess Willard in 1915. But keep those cameras holstered, because you're in the wrong place!

The Orpheum Theater at 842 South Broadway was actually built in 1926. The historic Orpheum from Houdini's era is located a few blocks away at 630 South Broadway and is now called the Palace Theater. This was the site of Houdini's encounter with the heavyweight boxing champ.

Houdini actually performed in three different L.A. Orpheum theaters during his career. In 1899 he performed at the Grand Opera House at 110 S. Main St., which was the theater the Orpheum circuit used at the time. In 1903, Orpheum built their own theater at 227 S. Spring St. It was here that Houdini performed in 1907. That theater become Fischer's Lyceum in 1911 when Orpheum moved into their spectacular new theater at 630 South Broadway.

This was Orpheum's home during the Golden Age of Vaudeville. It not only saw performances by Houdini (in 1915 and 1923) but also Al Jolson, Sarah Bernhardt, the Marx Brothers, W.C Fields and Will Rogers. It was renamed The Palace in 1926 when the fourth and final Orpheum was built down the street. Today it is the oldest of the remaining Orpheum theaters in the United States.

While the first two Orpheum theaters are long gone, the Palace/Orpheum still stands. You can even still see read the Orpheum name on the facade. Today it is a rental space for film shoots and live venues.

Below are photos I took on November 3, 2013. The lobby was gated off on this day, but the good news is the theater occasionally allows tours. I will be watching for the next tour and hopefully bring you photos of the stage where Houdini bested the Champ. 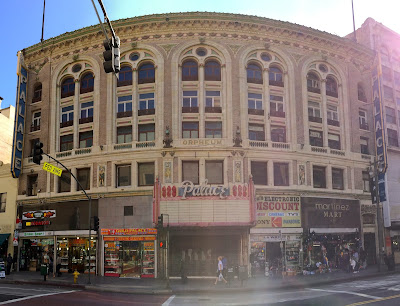 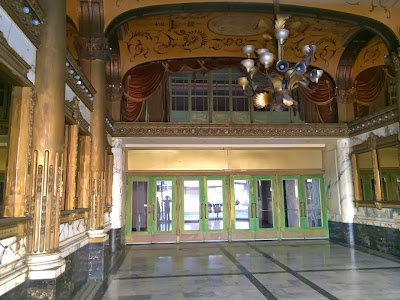 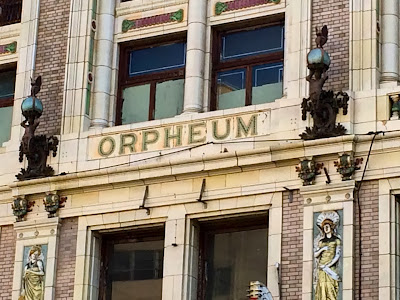 Thanks to Patrick Culliton for guiding me via cellphone down Broadway to Houdini's correct Orpheum. For more on the Palace Theater visit the official website.
Written by John Cox at 7:10 AM