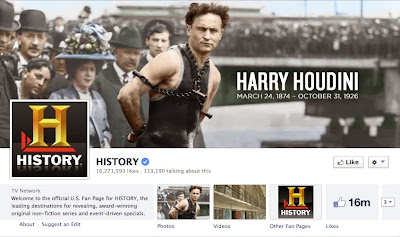 HISTORY used Halloween to kick off the official promotional campaign for their upcoming Houdini miniseries starring Adrien Brody as Houdini and Kristen Connolly as Bess. The official HISTORY Facebook page updated their cover photo to this nice colorized image of Houdini and posted the following:

On this day in 1926, Harry Houdini died of peritonitis in a Detroit hospital after the burst appendix poisoned his system. Find out how by going HERE. SHARE with your friends if you’re looking forward to HOUDINI starring Adrien Brody, coming in 2014.


This is a promising start for what I think will be an all-out effort by HISTORY to hype this two-night, 4-hour event. Don't be surprised if Houdini artifacts start to show up on other HISTORY shows such as Pawn Stars and American Pickers in 2014.

Houdini is currently shooting in Budapest under the direction of by Uli Edel from a script by Nicholas Meyer. The film is a co-production between A&E Studios and Lionsgate.
Written by John Cox at 6:56 PM