Suspended straitjacket escape in 1913, but it's not Houdini

It's been said that Houdini got the idea for his famous suspended straitjacket escape from a super fan, Randolph Douglas (a.k.a. Randini), during a visit to the Douglas home in England in June 1914. The most recent biography, The Secret Life of Houdini (2006), even goes as far to state that Randini "changed the course of magic history" that day. Houdini would first perform the suspend straitjacket in Kansas City on September 8, 1915. It would become his signature outdoor escape.

But now reader Bill Mullins sends in a clipping that throws us a curve in regards to where Houdini might have gotten the idea for the escape and how original it was to the escape king.

Here we have a magician named "Mysterio" performing a suspended straitjacket escape in 1913, a full year before the Douglas demonstration and two years before Houdini first did the escape himself. Furthermore, it appears that Mysterio did this escape a number of times. Digging a little deeper (via Ask Alexander) reveals that Mysterio is actually "The Great Alvin." Alvin would come into conflict with a magician named L.L. Gaffney who performed magic and handcuff escapes as "Mysterio" in Europe and the U.S. and objected to the use of his name.

Here's the full clipping from the Buffalo Evening News which ran 100 years ago today on November 21, 1913.

So did Houdini know about Mysterio and his suspended straitjacket escape? It seems unlikely that he wouldn't. Mysterio's escapes were well reported in the pages of The Sphinx. It appears he last did the escape in 1914, so perhaps by 1915 Houdini felt enough time had passed that he could do the escape himself. Funny to think that Houdini would imitate an imitator who was himself impersonating an imitator. (Did you get all that?)

To be fair, I don't believe Houdini ever claimed the suspended straitjacket escape to be an "original invention" the way he advertised the Milk Can and Water Torture Cell as such. Of course, he also never said it wasn't. But Houdini had the foresight and courage to be raised over 100 feet, which truly made this a spectacular escape. When it comes to suspended straitjackets, height does matter.

The loser here may be Randolph Douglas and the notion that he introduced Houdini to the idea of the suspended straitjacket escape. Magic history was not changed that day. But it could be that Houdini let the young man believe that he had indeed showed him something new. Heck, it took us 100 years to discover otherwise.

Thanks to Bill Mullins for this revelatory discovery.

UPDATE: Only after I finished this post did I learn that Joe Notaro revealed this news on his blog Harry Houdini Circumstantial Evidence in October. Joe also discovered that Mysterio/Alivn's real name was Al Pitroff. Good work, Joe!
UPDATE 2: It appears Pitroff is still doing the suspended straitjacket escape in 1915, as can been seen in the below ad from the Perth Amboy Evening News, February 12, 1915. 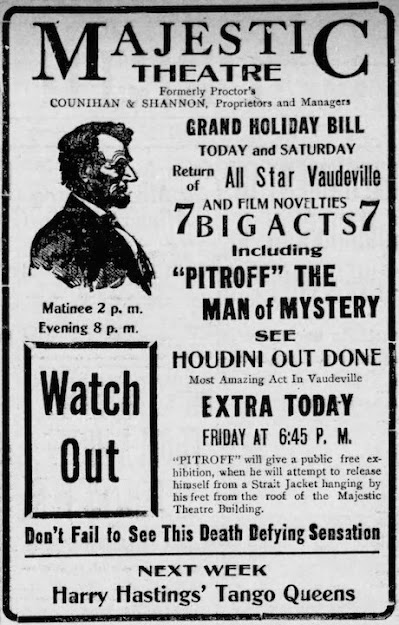 Related posts:
Written by John Cox at 7:29 AM