Here is an unpublished shot of Houdini hard at work in Hollywood on his first feature length film, The Grim Game. I'm not sure if this is a scene from the actual film. There is another photo of Houdini on this same wall hanging upside down holding actress Ann Forrest in his arms (which can been seen in Gibson's Original Houdini Scrapbook page 148). That shot was almost certainly taken for publicity, so maybe this one was as well? What I'd really like to know is whether this wall still exists somewhere in Los Angeles. [UPDATE: Now I know.] 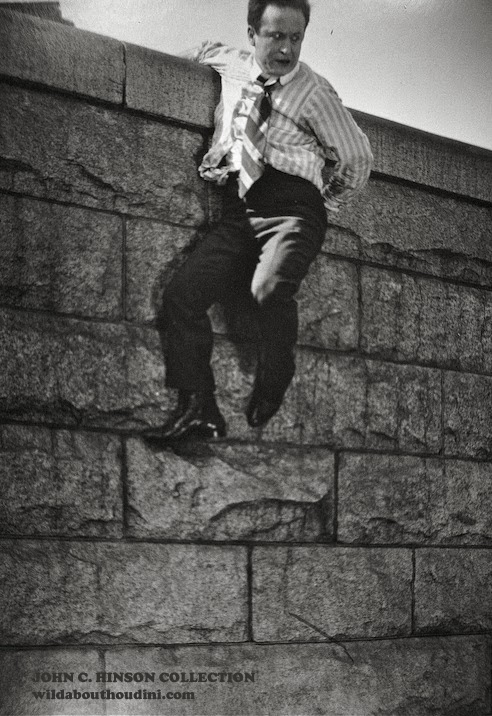 "The present generation can see me in person, but I want my most thrilling feats perpetuated on the screen, so people in later years can assure themselves that I actually did them. That's why I have saved the most sensational stunts I have ever done for this picture and have worked my head off to make them as successful as possible."


The irony of Houdini's quote above (from The Grim Game pressbook) is that The Grim Game is the one Houdini movie that isn't available to the very audience that Houdini says he is making the film for. Hopefully at some point a print will free up and we will finally be able to enjoy the result of Houdini's hard work.

Oh, what the heck, here's a bonus photo. This shot shows Houdini and Ann Forrest in some Grim Game cliffhanger action. The man works hard, people!