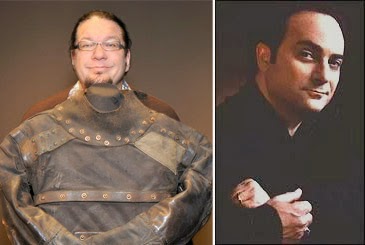 I listen to Penn Jillette's podcast Penn's Sunday School religiously (ha!) and in a recent episode (#88. The Movies That Destroyed America) Penn expressed a desire to play Sir Arthur Conan Doyle against the actor he thought would make the perfect Houdini; Kevin Pollak. The conversations started around 1:01 and here's part of what Penn said:


Later (around 1:19) Penn spoke at length about Houdini's fame as compared to modern magicians such as David Copperfield and Criss Angel. Now, I've heard Penn talk about his admiration for Houdini before (did a post here), but I don't think I've ever heard him express himself as eloquently or intensely as he does here. So if you're a Houdini buff and a Penn & Teller fan and haven't yet listened to one of Penn's podcasts, this might be the one to sample. My guess is you'll become a "member of the congregation" like me.

You know, I've yet to hear who is playing Conan Doyle in History's Houdini miniseries with Adrien Brody. If the part is still open... Just saying.