I'm changing up my choice of photo today for those arriving in L.A. this week for the Los Angeles Conference on Magic History. This is a magnificent unpublished shot of Houdini doing a suspended straitjacket escape from the historic Examiner building in downtown Los Angeles. (If you can't see Harry, click here.) 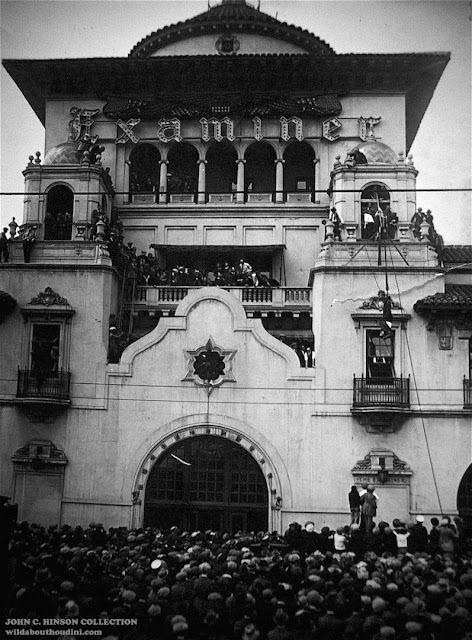 "I shall never forget that crowd as I hung suspended. It looked to me as if I was struggling over a bubbling sea."


As you can see, the beautiful Examiner building is as much the subject of this photo as Houdini. Publisher William Randolph Hearst commissioned Julia Morgan and Los Angeles architects Henke and Dodd to design the building in the popular Mission Revival style. Hearst was so pleased with the results that he later commissioned Morgan to design his massive San Simeon Castle. The Examiner building (later the Herald-Examiner) opened for business on January 1, 1915 and remained the newspaper's headquarters until the paper folded in 1989.

Happily, the Examiner building has survived at 1111 S. Broadway and still looks much as it did the day Houdini made his escape. The building is still owned by the Hearst Corporation and is now rented out for film shoots (including The Prestige). Below are photos I took of the building yesterday. 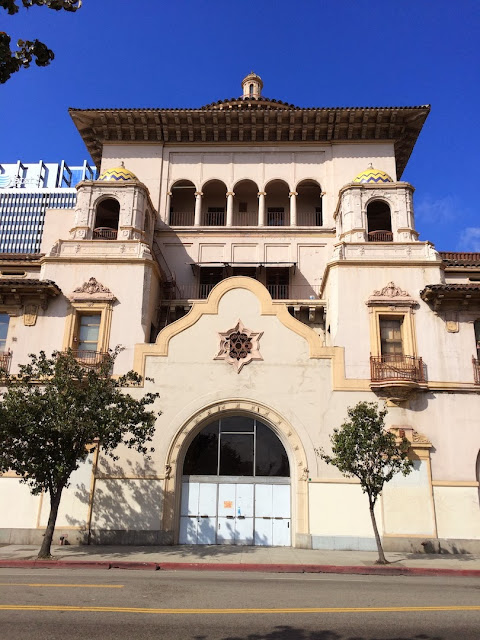 So when you've had your fill of Erdnase at the Conference, sneak on out and see some still living magic history downtown. Later this week I'll share more Houdini-Los Angeles history as well as some additional "then and now" shots from my Houdini photo safari in downtown yesterday.

UPDATE: The date of this escape was Wednesday, April 4, 1923. Also, the straitjacket Houdini used on this day was the same one that appeared on a 2011 episode of Pawn Stars.

UPDATE: Historic site of Houdini escape will be preserved.


Click here to view all the installments of Unpublished Houdini.
Written by John Cox at 7:45 AM