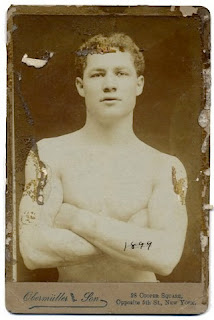 Who is playing (the adult) Theo Hardeen in History's Houdini miniseries? According to Roger Dreyer at the Houdini Museum of New York, a "well known actor" auditioned for the part back in September, and even consulted with the museum about what Hardeen's voice sounded like. (Roger's answer: "a very tough guy. Thick Brooklyn accent." Correct.)

Roger isn't saying who that actor might be, but it is exciting to know they are looking to cast a familiar name against Adrien Brody's Houdini. The role of Houdini's younger brother has become increasingly important in Houdini biopics over the years. While Hardeen did not appear in the 1953 Tony Curtis classic Houdini, he did show up in The Great Houdinis (1976) played by Jack Carter. When it came time for TNTs Houdini in 1998, Hardeen was featured in a co-starring role played by Mark Ruffalo. It now looks like History's Houdini is following suit and will give us a healthy helping of the Monarch of Manacles.

So did this "well known actor" get the part? Hopefully we won't have to wait long to unlock the answer.