Did Houdini return to Russia in 1913? 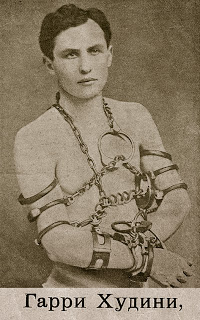 Author and Houdini aficionado David Saltman has a very interesting post on his blog The Houdini File about the possibility that Houdini could have returned to Russia in 1913, and may have even been involved in an effort to "undermine Rasputin." David has uncovered a Russian theater ticket from 1913 with Houdini's name on it, as well as a letter from Houdini to the U.S. Ambassador to Russia suggesting that they meet up in "Petersburg."

This is pretty wild stuff. Is it possible Houdini went back to Russia in the middle of his career without it ever being chronicled? I hate to say it, but it makes me wonder if there's something to the whole "Houdini was a spy" thing after all. I'm not ready to completely climb aboard that theory just yet, but I would recommend reading what David has uncovered below: