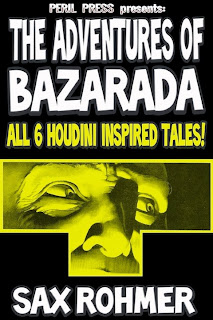 Here's a unique Houdini-related eBook publication from Peril Press. The Adventures of Bazarada - All 6 Houdini Inspired Tales! is a collection of six short stories by Sax Rohmer featuring a magician named, Bazarada.

According to the description on Amazon, "Sax Rohmer made friends with escape artist Harry Houdini, who wrote to him in praise of Rohmer's The Romance of Sorcery. Rohmer based his mystery-solving magician character Bazarada on Houdini."

The Bazarada stories appeared in Collier's magazine between September 1937 and August 1938. This ebook collects all six Bazarada stories: The Jade Serpent, Red Doctor, Tunnel of the Apes, The Mummy That Walked, Black Magic, and Death in the King's Room.

This edition also includes all 11 Ronald McLeod illustrations to the stories as well as a gallery of 11 cartoons from Collier's.

It appears this is currently only available as an eBook. It would be great if Peril Press could also release this in a printed edition.

Purchase The Adventures of Bazarada - All 6 Houdini Inspired Tales! (eBook) on Amazon.com.

UPDATE: David Saltman has a few terrific posts about the Bazarada stories and their connections to Houdini at his blog The Houdini File HERE and HERE.
Written by John Cox at 12:35 PM