An original one-sheet poster for Houdini's 1919 silent feature, The Grim Game, is currently up for auction via Bruce Hershenson's eMoviePoster.com. This poster was first sold by Christie's in 1995 for $19,550. It's now been reconsigned to Bruce and is currently at $26,050. The auction ends on Tuesday (which just happens to be my birthday, in case anyone is looking for a gift idea).

Here's some history and a description of the poster from the auction site: 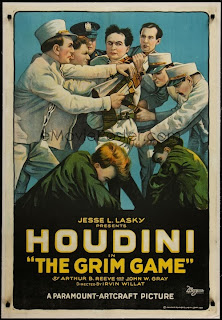 This poster came from the legendary collection of Charles A. Dyas, who was a theater owner who collected posters from movies he showed from between 1919 and the early 1940s. He left his collection to his children, and in 1990 and 1991, the best of the collection was auctioned by Bruce Hershenson at Christie's Auction House in New York City, EXCEPT for a handful of the very best posters, which the children wanted to keep (including this one). In 1995, they decided to auction those remaining posters, and Bruce Hershenson again auctioned them at Christie's, and this poster sold in that auction for $19,550! The poster offered here is that very same poster that was auctioned 18 years ago! Finally, note that this poster measures 28 1/4" x 41" [72 x 104 cm].

Overall Condition and Pre-Restoration Defects with Quality of Restoration: very good to fine. The poster had small paper loss at the top and bottom crossfold, with tiny paper loss at the middle crossfold. It had minor wear on the foldlines. It had a few small tears in the right and bottom borders, with a 1/4" x 1 1/2" area of vertical paper loss near the bottom of the right blank border. Otherwise, the poster was in really nice condition prior to linenbacking (it had been in the position of Mr. Dyas from 1919, when he first showed it at his theater until 1995, when his son consigned it to Bruce Hershenson). The poster was nicely backed by Igor Edelman, and displays fantastically!


Might this set a new record? We will find out on Tuesday.

UPDATE: It's funny that I would speculate about this setting a new record, because that's exactly what it did!
Written by John Cox at 2:51 PM