For this Thanksgiving week, I couldn't resist this unpublished shot of Harry and Bess Houdini with two Native Americans. Judging by their curious mix of contemporary and traditional clothing, these men appear to be genuine Native Americans and not costumed performers as seen in shots like this. This could have even been taken on an actual Indian Reservation during the Houdinis travels through the American Southwest in December 1915.

In a later installment of UH, I'll share more from this unrecorded trip, but for now enjoy this holiday shot of Harry and Bessie as tourists (click to enlarge). 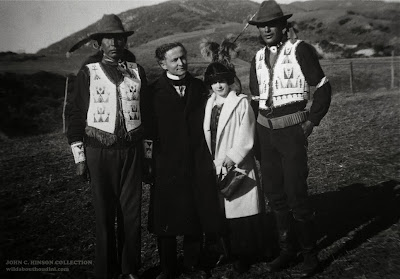 I couldn't find an applicable Houdini quote to pair with this photo, so on behalf of Harry and Bess allow me to say…

Next week we'll head back into the portrait studio for a shot of Houdini "with his baby."


Click here to view all the installments of Unpublished Houdini

UPDATE: I believe I've now identified the location of this photo, and it's not what we thought! Check out: The Houdinis at Inceville.
Written by John Cox at 9:19 AM