Welcome to another year of WILD ABOUT HARRY! Let's kick off 2016 with a look back at what Houdini himself was up to 100 years ago. 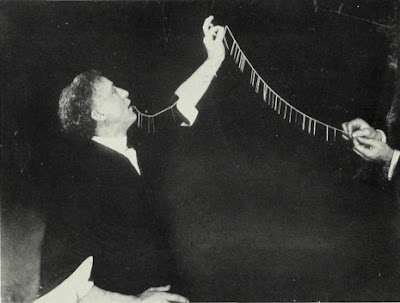 Houdini walked into the Orpheum office yesterday afternoon at the close of his "escape act," threw himself into a chair, took a very long breath, sank back as far as possible, then took another deep breath inhalation, and relaxed with a "well-I'm-glad-that's over" sort of expression on his face.

"Say, describe that sensation," said the interviewer. "How do you feel when you emerge from that cell of torture?"

Houdini sat up straight, looked into the distance and began to think. "Well I can't describe it," he replied. "I've tried to, but it's no use. It's such a peculiar sensation, it's hard to tell what it's like. I feel as though a great weight was thrown off, or that I had been relieved of a great responsibility. Yes, I am always a little exhausted, and can't help feeling glad that the act is over in safety."


Houdini had good reason to be exhausted. At the start of 1916, he was a year into a nationwide vaudeville tour that would not let up until summer. His act at this time primarily consisted of the Needles, Water Torture Cell, and select challenge escapes. The suspended straitjacket escape, first performed in 1915, was now his standard outdoor stunt.

Houdini also appears to have been thinking about his own mortality. His first letter of the new year was to Bess with instructions on what to do should he die first: "I ask you from my tomb to protect yourself, then I will be able to sleep easy and know that I have succeeded in helping you to a restful and happy old age." He would periodically re-read the letter and countersign it.

Following January engagements in Colorado Springs and Lincoln, Nebraska (where he gave the above interview on January 7), Houdini embarked on his very first tour of Texas, playing a circuit of Majestic theaters for the Interstate Amusement Company. He kicked off on January 10 in Fort Worth. While it's generally believed Houdini developed no new escapes in 1916, in Fort Worth he did an outside stunt that appears to have been something new. He was shackled and tied behind a motorcycle, freeing himself as he was dragged down the street. Houdini then travelled to Dallas where he performed a suspended straitjacket escape from the Dallas News building. Houston and San Antonio followed. He ended his tour in Austin where he accepted a packing crate challenge from students at The University of Texas. (I'll have more on Houdini's Texas tour later this month.)

After playing stints in New Orleans, Chicago, Milwaukee (another suspended jacket escape from the Milwaukee Journal building) and Ohio, Houdini found himself back home in New York in time for his 42nd birthday. But it wasn't 278 that Houdini returned to for these few weeks. After his mother's death, Houdini and Bess had left their Harlem Brownstone and moved in with Hardeen and his family in Flatbush, which certainly must have been cozy. To make matters worse, Houdini had embarked on building what he hoped would be one of the world's greatest dramatic collections, and the mounds of new material he acquired flooded into Flatbush.

By mid April, Houdini was back on the road in Washington, D.C. where he performed a suspended straitjacket escape before a crowd that police estimated at 100,000. On April 22, President Woodrow Wilson and the new first lady came to see Houdini perform at Keith's Theater. That same day Houdini visited the Senate and was recognized by Vice President Marshall who invited him into his chambers. Houdini called it the proudest day of his life. But his weariness once again manifested when he told the Washington Times that he intended his D.C. straitjacket escape to be his last:

"I'll still be entertaining the public for many years to come, but I intend to do it along lines not quite so spectacular. As an escapist extraordinary I feel that I'm about through."


Houdini took the summer months off, building his drama collection and also preparing for what would be the next chapter in his life and career. Movies had captured his attention during his travels out west in 1915, and Houdini now entered into business with a German inventor, Gustav Dietz, who had created a new process for developing motion picture film. In September Houdini founded the Film Developing Corporation (FDC) with offices in Manhattan and a film lab in New Jersey. In was Houdini's first major step into the movie business and his first attempt to make a living outside of magic. Unfortunately, the FDC would become an expensive albatross in the years that followed.

On August 10, Houdini gave a 3-hour performance for the inmates at Sing Sing Prison. He also struck up his famous friendship with Harry Kellar, who first visited him in Flatbush. Houdini would cherish his friendship with the great magician. Kellar also invested in Houdini's Film Developing Corporation.

It was also during these summer months that Houdini oversaw the completion of a major building project that had been ongoing for over a year. Having bought a family plot in Machpelah cemetery in 1904, he was now erecting a large granite exedra "in the memory of his parents." The exedra cost him $40,000 ($911,891 today). It was finally unveiled in a special ceremony on October 1, 1916.


In Fall, Houdini was back out on the road, playing various cities in New York, Michigan, Pennsylvania and Ohio. He also played a week in Toronto, Canada. Forgoing or forgetting his statement in Washington about no more escape spectaculars, he ended the year with a flurry of suspended straitjacket escapes in Pittsburgh, Cincinnati, Columbus and Cleveland.

You didn't really expect him to stop, did you?

Houdini spent the final week of 1916 playing the Palace Theater in New York, opening on Christmas Day. He then traveled alone in Philadelphia. Bess remained home in New York due to the death of her sister. Houdini once again penned her a New Year's Day letter tinged with sense of mortality:

"Keep up your courage, sweetheart, and bear your loss like the brave little soldier that you are, for we are all more or less an army fighting our way to our own graves, but let us do so stout of heart, smile and cheer our less fortunete brethren who are also in the trenches of life and who are not as well equipped with mates as you and I are, nor with the world's goods."