An 1896 playbill clipping for the Marco Magic Company in Halifax, Nova Scotia, sold today at Potter & Potter's The Magic Collection of David Baldwin II auction for $2880 (including 20% buyers premium).

The young Houdini and Bess were members of this ill-fated magic troupe. The program shows "Twenty Minutes with Mysterious Harry Houdini" and also lists Houdini as the Stage Director. "Mlle Marco, Psychometric Artist, Clairvoyant and Exponent of Mental Occultism", who gets second billing below Marco himself, is actually Bess.

[The full story of the Houdinis Maritime misadventure appears in the excellent 2012 book, The Metamorphosis: The Apprenticeship of Harry Houdini, by Bruce MacNab.]

It's pretty uncommon to see original items from so early in Houdini's career at auction, and even rarer to see something from the Marco show, so this was a nice get for someone. At one point this had belonged to Bess's sister, Marie Hinson.

The auction also featured several original stills from The Man From Beyond, some stamped "H.P.C." on the back (for Houdini Picture Corporation). Each sold for between $400-$750.

A surprise in the auction was a pair of original press photos from Houdini's Shelton Pool Test which fetched $1,800 on a $250-$350 estimate. They are not unknown images, so I'm not sure why they went so high. 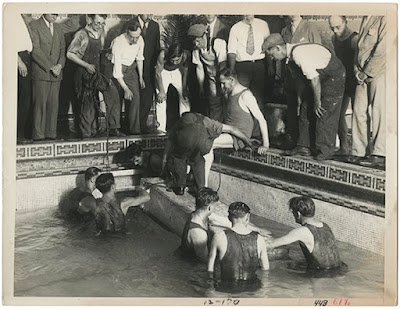 I had my eye on two letters; one from Hardeen to Houdini written on Film Developing Corp. stationary, and the other written by Edward Saint on "Madame Houdini Speaks" stationary (this was the working title for Religious Racketeers). Both had magnificent content and fetched $570 and $360 respectively.