It was 65 years ago today on June 25, 1953 that Paramount's Houdini starring Tony Curtis and Janet Leigh had its world premiere opening at the Des Moines Theater in Des Moines, Iowa. Why did the movie premiere in Des Moines instead of New York or Los Angeles? Beats me! Below is the terrific opening day ad from the Des Moines Tribune. 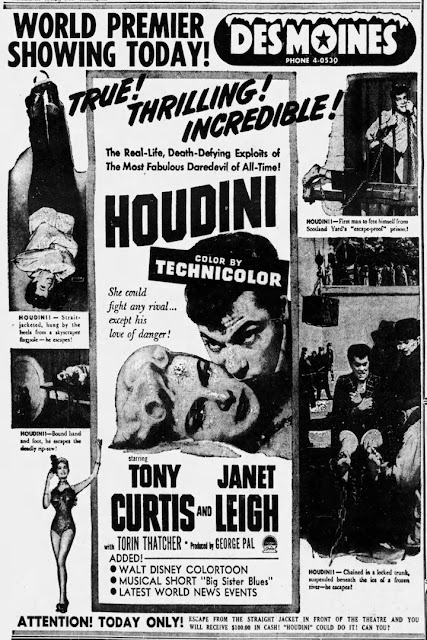 As a promotion, the theater offered $100 to anyone who could free themselves from a straitjacket during opening day. In order to get theater owner Don Knight to agree to the contest, the Paramount publicity agent, David F. Friedman, had to bet him $100 that no one could do it. The first person to take up the challenge was 18-year-old Ed Brown, who arrived at 8:30am for the 11:30am contest. The papers reported:

So young Brown was strapped into the strait jacket, the first one to try it. He wiggled and twisted, sweat and grunted. Finally he got the back strap of the jacket around to the front and got his teeth on the strap. In three minutes he was out.

He handed the jacket to an usher and said with his right hand extended, "Where's my money?"

The paper went on the report that forty others tried to escape from the jacket but failed (which I find a little hard to swallow).

The movie appears to have been a hit in Des Moines. The next day the Tribune ran a very favorable review, stating: "It seems almost impossible that anyone would try to improve upon the extraordinary career of Houdini, still hailed as the world's greatest magician. But Paramount does."