New evidence of Houdini's earliest film appearance UPDATE: Not Houdini after all

At the moment, the earliest surviving film footage of Houdini is his Rochester bridge jump in 1907. There is also evidence of a lost film, Houdini Defeats Hackenschmidt, shown in Boston in 1906. But recently I found evidence of Houdini film footage that pre-dates both those by several years.

This clipping from The Record Argus is about a Lyman H. Howe "moving pictures" exhibition in Warren, Pennsylvania on March 13, 1900. Among the descriptions of what was shown that night is a mention of "Houdini's magic pictures." 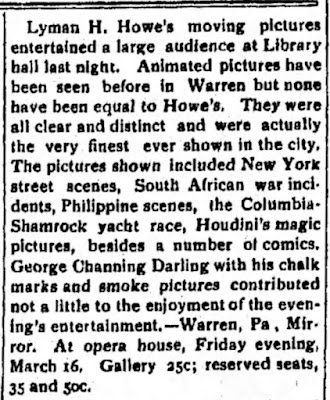 What's intriguing is this pre-dates Houdini's trip to Europe and his break out fame, so this would be film footage of Houdini before he was widely known to the public. This precludes the possibility that "Houdini's magic" is being used here in a general sense as one might see today. This is well before the Houdini name became a magic brand. So "Houdini" here can almost only mean the real person. 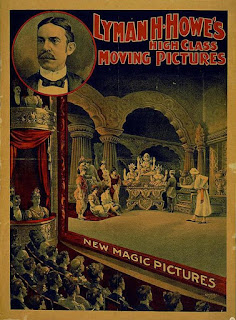 Lyman H. Howe had a long career making and exhibiting early motion pictures. Unable to secure an Edison patent, he developed his own projection system, the animotiscope, which included a second take up reel that became standard on all projectors. Howe lived and worked in Wilkes-Barre, Pennsylvania, which suggests his Houdini footage could have been made while Harry and Bess were touring with the Welsh Bros. Circus. This would make the footage from 1898, which is even more mind-blowing!

So what happened to Howe's film collection? Might there be footage of a very young Houdini out there somewhere? Just another master mystery.

UPDATE: So it looks like I blew it and was taken in by a typo. Bill Mullins has uncovered a clipping from the March 3, 1900 Warren Evening Democrat that gives more details on Howe's films, and the magician being referenced here is Robert-Houdin, not Houdini, which I really should have considered. It sounds like it might even be a Georges Méliès film. Here's the full article: