LINK: How Harry Houdini stayed chained to his roots as a rabbi’s son 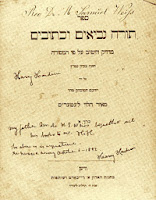 Here's an interesting article from The Times of Israel about Houdini's Judaism and the new exhibition, Inescapable: The Life and Legacy of Harry Houdini, which opens today at The Jewish Museum of Maryland. Of particular note is this significant piece of new information uncovered by curator David London.

London cited a letter from Houdini to “a lifetime friend” in Appleton, Wisconsin, in which the magician told of his “relief one year after his mother’s death, when he no longer had to recite the Mourner’s Kaddish prayer nightly.” While it is not known whether he did this on his own accord or out of reverence for his parents, “we discovered he did that 365 days,” London said.


Click the headline to read the full article at The Times of Israel.

Thanks to Ken Trombly.