Houdini and the Five Cent Circus released in UK

Today sees the release of Houdini and the Five Cent Circus by Keith Gray, a fictionalized Houdini adventure aimed at young readers. The cover has a bit of a Harry Potter vibe. I'm thinking that's not a coincidence. 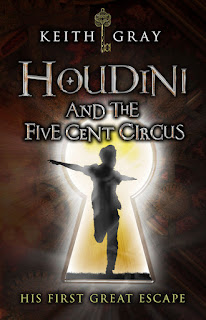 The year is 1885 and Erik Weisz, a penniless immigrant, has found himself in trouble again. His uncanny talent for picking locks and his gleeful showboating to match it, have earned him very few friends and a bad reputation. But this is just the beginning of his story and Erik is destined for a far more magical future. Watch as he transforms before your very eyes into the greatest showman the world has ever seen...


You can purchase Houdini and the Five Cent Circus at Amazon.co.uk.

Click here to read a special guest blog by author Keith Gray about how he became a Houdini fan.