The Art of Escaping by Erin Callahan

Escape artist Dorothy Dietrich and the 1987 movie Young Harry Houdini provide inspiration for the young protagonist in The Art of Escaping, a new novel by Erin Callahan. Here's a description. 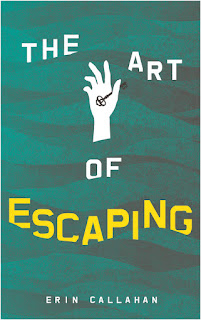 Seventeen-year-old Mattie has a hidden obsession: escapology. Emphasis on hidden. If anyone from school finds out, she’ll be abandoned to her haters. Facing a long and lonely summer, Mattie finally seeks out Miyu, the reclusive daughter of a world-renowned escape artist. Following in Houdini’s footsteps, Miyu helps Mattie secretly transform herself into an escapologist and performance artist.

When Will, a popular athlete from school, discovers Mattie’s act at an underground venue, Mattie fears her secret persona will be exposed. Instead of outing her, though, Will tells Mattie a secret not even his girlfriend knows. Through a blossoming friendship, the two must find a way to express their authentic selves.

Told through the perspectives of the witty main characters, this funny and fresh debut explores the power of stage personas and secret spaces, and speaks to the uncanny ways in which friendships transform us.


Author Erin Callahan will be appearing tomorrow (June 28) at Gibson's bookstore in Concord, New Hampshire, for the official book launch. There will also be a reading by Erin at the Houdini Museum of Scranton on July 14 at 5:00pm. You'll be able to get the book signed by Erin and Dorothy Dietrich herself!

For more information on Erin Callahan's work and upcoming appearances check out her official website.

The Art of Escaping can be purchased on Amazon.com (U.S.) and Amazon.co.uk (UK).